Acnestis. It’s the itch you can’t scratch. There, between your shoulder blades. A complaint that won’t leave you alone. A retort you don’t think of ’til it wakes you at night, meanly appropriate and well deserved by the jerk who prompted it. Destructive fake facts based on dystopian fantasies.

You can’t scratch that itch because: the complaint can never be satisfied, your retort is not suitable for work, the lie is one of many seeking freedom from being scratched.

Define the parameters and set up a fair fight. Keep scratching until truth bleeds through. You’re not the only one itching.

Dick Dern opened the nozzle, turning a spray of water on his classic Cadillac. With a vague feeling of déjà vu, he rubbed the hood with a chamois cloth and talked the car smoothly into the garage. The man was persuasive.

He walked inside to his office, where his wife was shredding papers.

“Honey, can’t we throw this old thing out?” Jane Dern pointed to a manly wooden puppet with a pouting mouth and an extraordinarily long nose.

Dick closed the closet. “No way. That dummy is the most successful campaign prop in political history. I’ll need it again soon. ”

The show was conceived to unload MAGA hats. No one wears them anymore. Full hazmat suits are de rigueur.

Whatever, no one really cares. They’re all home watching the president.

A sprightly octogenarian, Donnie as his fans call him, bounds on stage. He’s surrounded by hats. Sean throws them in the air and tosses them to the audience. Donnie dramatically draws a slip of paper from a black box decorated in crux gammata, Celtic runes, exclamations, and dollar signs. For the price of a meal at a Trump restaurant, you can submit a question. But you won’t get an answer.

Convinced that the New Yorker publishes only depressing fiction, Homeland Security missed the monsters landing in Manhattan. The administration got involved when their Russian counterparts cited a credible report from The Onion. But, it was too late. Soon monsters were cavorting with city rats. If you think the aliens were big before, OMG. Hybrids the size of Teslas literally popped from the sewer grates.

Fortunately, the White House saw the situation as an opportunity. Democratic mayor plus vermin problem equals election year coup. It might have worked, except the whole thing was a set up. The rat-monsters wore MAGA hats.

“Donald Trump: the most powerful man on the planet.” The president rinsed his toothbrush. With a lockdown in place, the mirror shot was as close as he could get to a rally. “Don’t you forget it.”

Knotting his robe, The Donald ran ten short feet to bed. “You’ve still got it, baby.”

Picking up his phone, he got to work. Fox News flashed on the TV. His fingers flew, red hot tweets stacking up like dollar pancakes on Sunday morning at HoJos. Invoking emergency powers, he had invalidated the election, clinched by a 5-4 ruling from the Supremes. Now that’s Justice.

Mother Nature announced that her nephew, Dorian, was limbering up for a run along the East Coast. Not known for her empathy, the goddess told an AP reporter that she’d be cheering him on.

She mugged for the camera. “Don’t you love my new look,” she asked pointing to her melting ice caps. “Things are so fluid now.” She held a towel, maybe longing for a hot bath or a long shower. “Global warming has changed my whole look. So many insects, forest fires, new algal blooms.”

She ended the interview saying, “It’s a new world. Get used to it.”

Insects buzzed in Angie’s ears. The air was cooling, the way it did during her afternoon soaps.

Something outside announced itself with a booming jet plane noise. Ted ran through the living room, onto the patio. The object he found was small, less than two cubic inches, but heavy.

After toing and froing past the telly, he showed Angie a piece of debris clutched in an oven mitt. It was a burnt toast color. “Space junk. Like the magazine picture.”

“Sure ’nuff.” She motioned Ted away. “Better save it. Call up the museum to collect it later, after my shows.”

In the kind of stunning reversal the president is famous for, Trump declared that he will be going back to Germany, where he came from. Pouting, Trump said, “No one appreciates my genius. I made America what it is. The Dems broke it.”

It’s not the first time a Trump fled their country. Trump’s grandfather came from Germany as an economic migrant. His grandson would have kept him out. Friedrich dodged the draft in Germany, so they didn’t want him either. Like his grandson, he was not a patriot.

There’s less light in the morning, more days when you pile on sweaters, two maybe three in lieu of turning up the thermostat. A chill in the air. Literally and figuratively. Bread dough rises slower than in summer. Tempers flare. Violence on the border, in the embassies, in my kitchen where I shout, “Liar, liar, pants on fire,” at the suggestion that we must come together today.

Why today? Why not two years ago? For what? So Lucy can pull the football away again? All of us, Charlie Browns. Decent folk. Taken advantage of once too often. Now go vote. 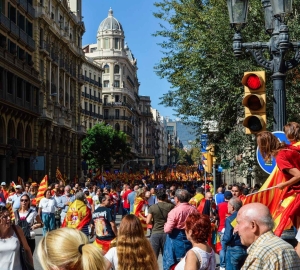 When the president declared war, he united the country. Cities of all sizes came out in force to demonstrate. There were signs that read, “The Achilles heel that made America great,” and, “Heel no, we won’t go.”

Three days on, the generals traded the nuclear codes for a military parade. The president tweeted he was joking. Like Reagan saying he’d bomb Iran. No one corrected the president. Reagan said Russia.

Some people remembered. Putin remembered. McCain wanted credit since he’d said, “Bomb, bomb, Iran.” Someone quipped about rockin’ and rollin’ without a plan. Most people agreed. The president bombed again.